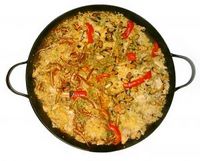 This Chicken Tikka Jambalaya Recipe is a traditional Louisiana Cajun dish originating from the rural, swamp areas. It's similar to the Spanish Paella where rice, meat and vegetables are all cooked in one pot with a rich stock that is absorbed by the rice.

As with many classic recipes, variations to the original recipe have sprung up over the last hundred years and the exact origins of the word 'Jambalaya' or the dish are still disputed. A popular theory is that Jambalaya originated in the Caribbean Islands. The Spanish paella mixed with the local Caribbean foods resulted in the Jambalaya.

Today, Gonzales, Louisiana is the Jambalaya Capital of the world and the annual Jambalaya Festival is held there every Spring. Cooks from all over compete in the World Champion Jambalaya Cooking contest.

You'll see that the recipe below contains no tomatoes. Also known as the Cajun Jambalaya, this is the characteristic of southwestern and south-central Louisiana. The difference between Jambalaya, gumbo and étouffée is the way in which the rice is included.

Jambalaya is a good way to cater for a lot of people. You can really make a small amount of chicken serve a large crowd. Which sounds perfect if you have a large family like I do and they appreciate spices.

This Chicken Tikka Jambalaya Recipe is a tasty combination of Indian and Cajun cooking. The chicken pieces are marinaded before cooking in a Tikka marinade and then cooked in the marinade. This is then added to the Jambalaya ingredients and cooked until the rice is done.

Combine the marinade ingredients well in a bowel. Place the chicken in the marinade and store in the refrigerator for a few hours.

In a large saucepan or ovenproof casserole dish fry the bacon until crisp. Remove and set aside.

Add the oil to the pan and cook the onions until soft. Add the celery and greenpepper and cook for another 3 minutes.

Then add the rice and while stirring frequently, cook for about 5 minutes until the rice goes translucent.

In a seperate pan cook the marinaded chicken in the marinade on a medium heat for 10 minutes.

To the pan with the rice, add the chicken stock with the tomatoes and thyme. Finally add the cooked chicken and marined and the bacon.

Bring the whole mix to the boil slowly and stir gently if needed. Cover and place in a preheated oven at 160 degrees C or 320 dgrees F. You can also let the Jambalaya gently simmer on the the stovetop.

Cook for about 30 minutes or until the rice is tender and the liquid has been absorbed. It is best to check once or twice during the cooking time that the rice has not gone dry and burning. If necessary add more water or stock.

Add the parsley and fork through before serving. 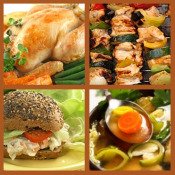